I was not being antisocial, I was checking the tide times to make sure we did not get stuck and have to live in a cave or be eaten by selkies.

I have tended towards the small side during my pregnancy. Obviously, as I wasn’t even aware anything was different until fairly recently. However I did think that over the past couple of weeks I have got noticeably  bigger. I now have a defined roundness that screams ‘baby!’ rather than ‘fatty!’ At least I think so.

On Tuesday I had my 32 week appointment. My fundal measurement was apparently only 2cm more than last time – I’m measuring 29cm when I should be at least 30, usually between 30-34. I also had traces of protein in my urine, so had to send off a sample and be scheduled in for another scan. I’m not complaining about this because it is fun to see our little ghostfishbaby being all weird in there, and he’s much more active lately so there’ll probably be a lot to see. But it is one of those ‘very slightly’ worrying things where it’s most likely nothing at all, there’s just this ever so tiny chance that something is catastrophically wrong.

Also on Tuesday we went to the beach, and looking at the photos I was bemused to realise my belly did not actually look as big as it does to me. 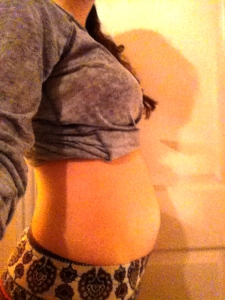 I miss that curve in my back.

For comparison, here is a bump selfie I took at 21 weeks. I’ve grown, but maybe not that much.

I’m spending this afternoon eating pringles, hummus and cake. I haven’t bothered to weigh myself in a long time so I will just assume I am about 50 stone and therefore beyond help.

As a side note I am extremely pleased that my midwife has chosen not to weigh me at any of our appointments. I think I was weighed at the very beginning of the year and since then have not been forced to confront the scales. This is good.

My boss told me I should schedule myself for a C-section now. All I can think of is the story my A level Law teacher told us about the Caesarean birth of her daughter. She told us she was quite out of it from painkillers and then the anaesthetic and it felt like someone had reached inside her and was doing the washing up. This sounds far too surreal to me. I have enough worries with my ridiculous pregnancy dreams. I really hope the baby will not be born via osmosis through the wall of my stomach and then be attached to an umbilical cord growing out of my own bellybutton forever.